The Power of Logarithmic Scale

What’s a logarithmic scale? That’s a commonly asked question by storyboard designers. Let’s uncover its true power by seeing when and how the logarithmic scale is applied based on examples from DataClarity visualizations.

The reason to use logarithmic scales is to resolve an issue with visualizations that skew towards large values in a dataset. For example, if a few points of data are much larger than most of the data, the use of a logarithmic scale will provide better data visualization and will make it easier to spot patterns and identify relationships.

The use of logarithmic scales is also very common in datasets for acidity (pH scale), spiciness (Scoville Heat Scale), and earthquake intensity (Richter Scale). For most other datasets such as sales data or customer survey data, the use of a logarithmic scale is not so apparent until you visualize the data.

Let’s say we have a sales dataset and perform a gross margin analysis by country. Using a layered bar chart, we have gross sales and sales costs measures plotted. Notice how the United States gross sales data overwhelms the chart when it is plotted using a standard linear scale. It is difficult to spot any variances in gross sales for countries such as Belgium, Sweden, and India. Since this is a high margin business, plotting sales costs on this same chart also make it difficult to see if there are any variances between countries. 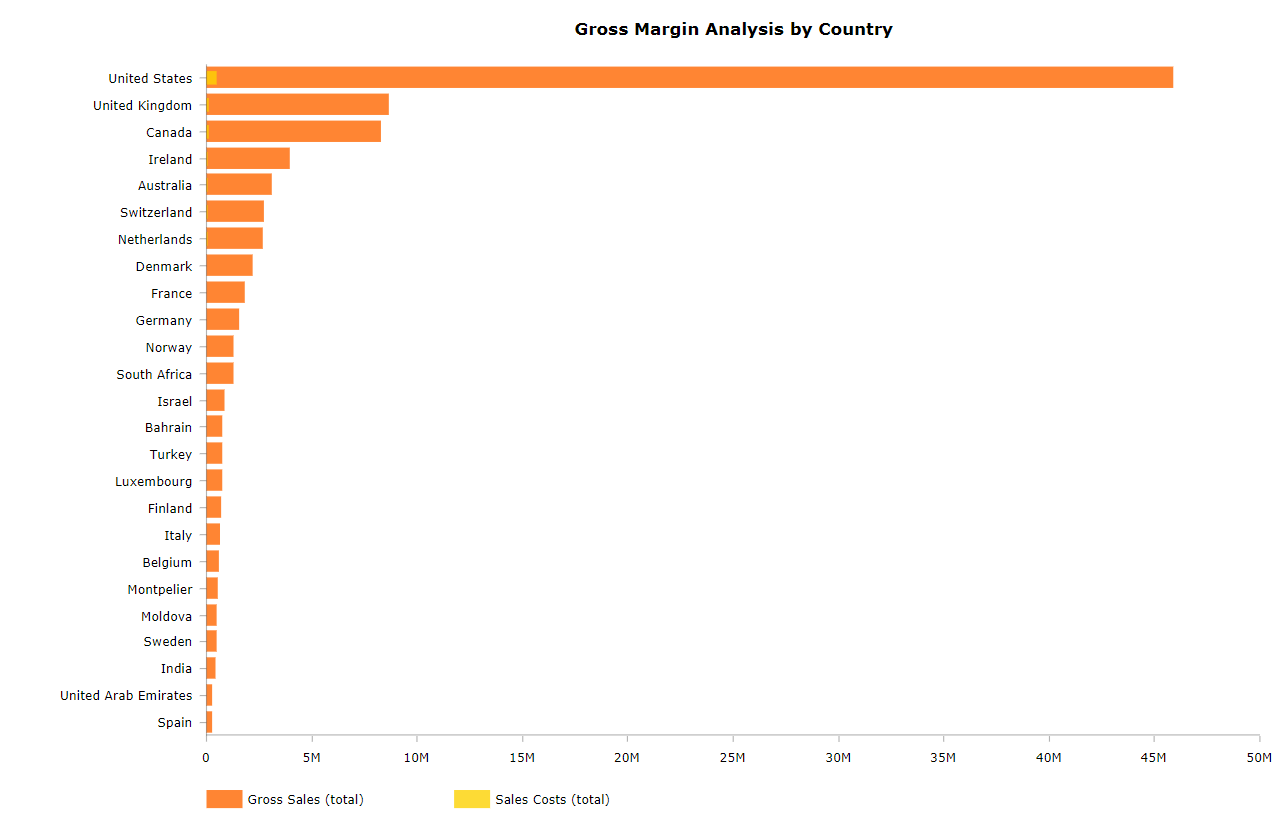 Now, let’s select the logarithmic scale option for the chart and observe how the visualization changes. You can see, for example, that the United Arab Emirates (UAE) and Spain both have about the same gross sales but Spain’s sales costs are significantly higher than those in the UAE. 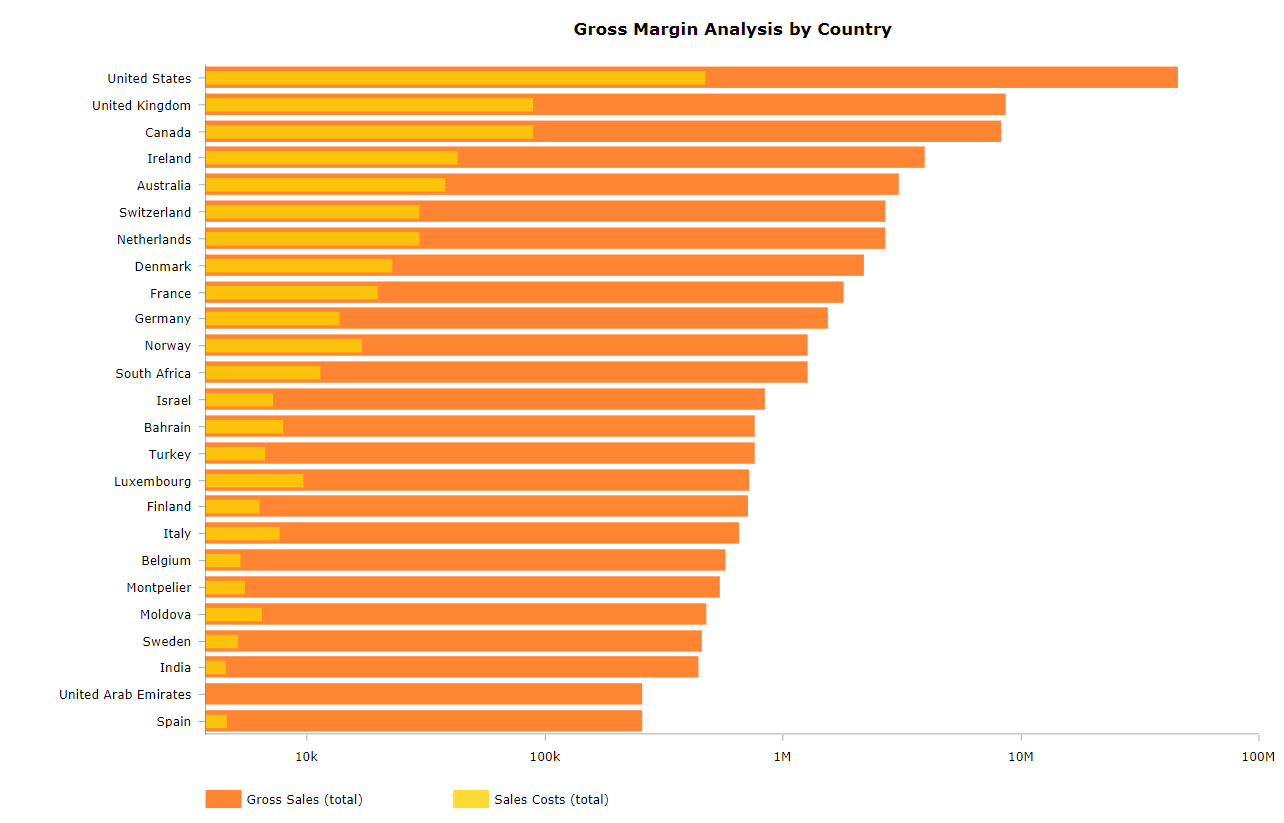 With this example in mind, let me try to explain what is a logarithmic scale. A logarithmic scale is a nonlinear scale that’s used when there is a large value range in your dataset. Instead of a standard linear scale, the values are based on order of magnitude. Each mark on an axis represents a value that is a multiple of the previous mark on the axis. For example, when using a base 10 log scale, the first mark shows 10 which is 101, the second mark is 100 which is 102, the third mark is 1,000 which is 103, and so on. Not all logarithmic scales use base 10. Depending on the dataset, using the DataClarity visualizations, we can determine the best logarithmic scale to use for plotting the data.

Let’s look at two other examples to see how the logarithmic scale can improve the ability to spot patterns and identify relationships in your data.

By using a bubble chart, we have plotted the sales costs vs. gross sales for each product line. The size of each bubble is the number of customers, and each department is segmented by a color. We have one extreme outlier which is causing the bulk of the data to be clustered together in the lower-left section of the chart. 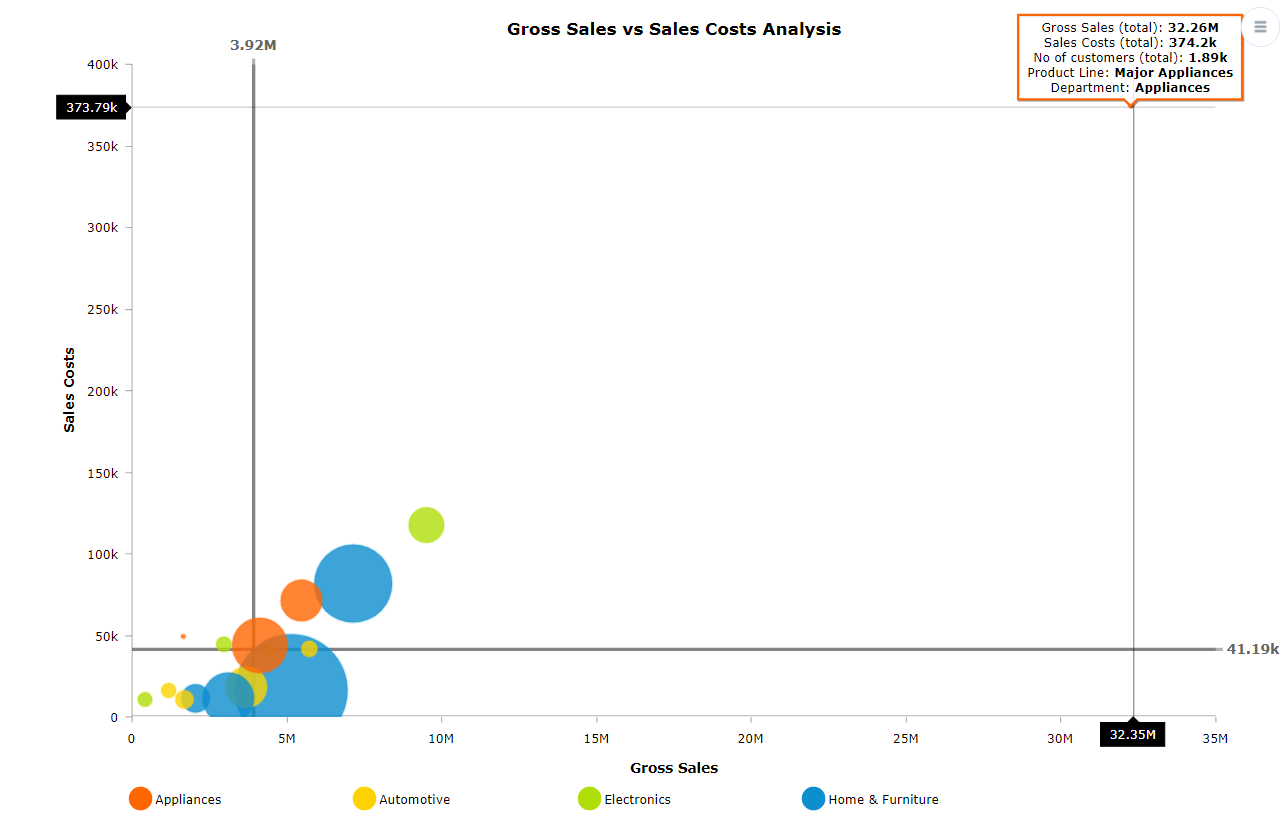 With the logarithmic scale applied, we decided to use a non-base 10 log scale. You can now see that there are quite a few product lines that have high gross sales and very low sales costs. 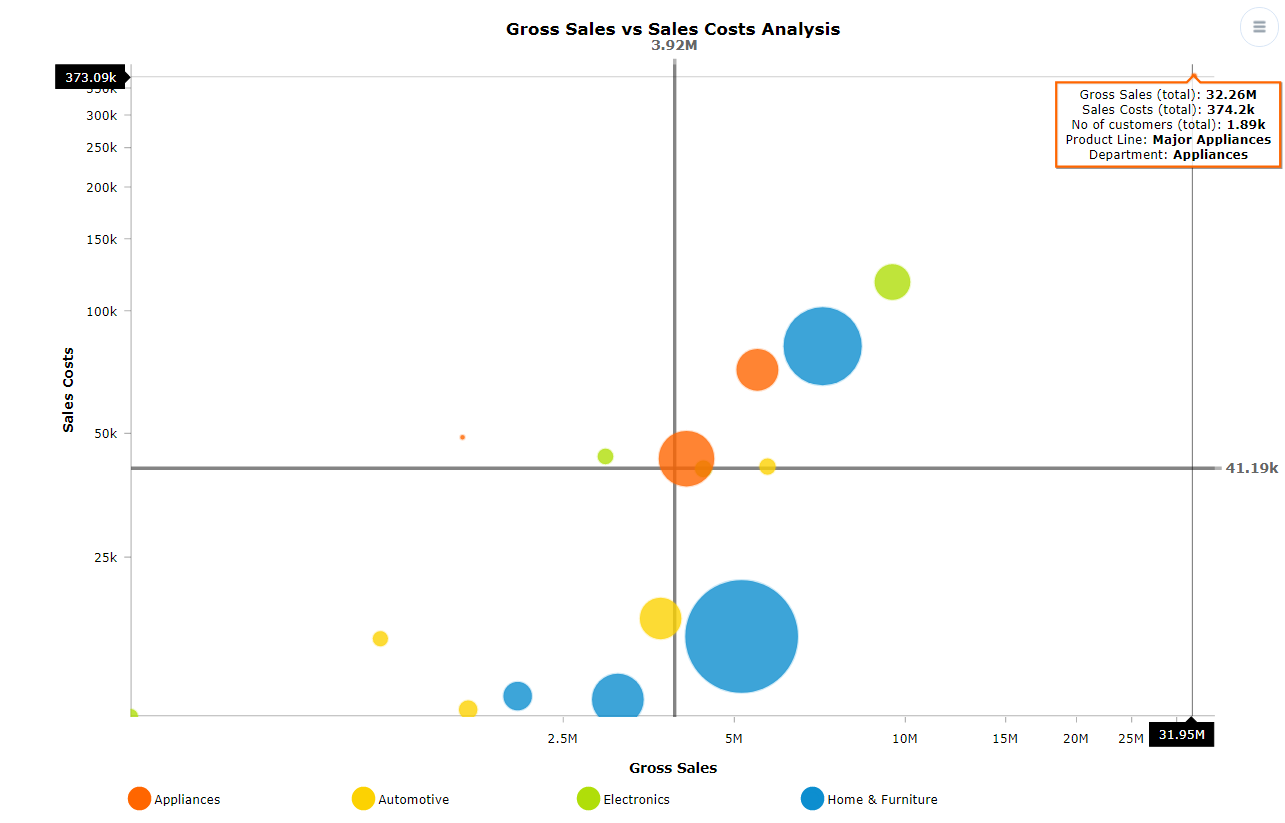 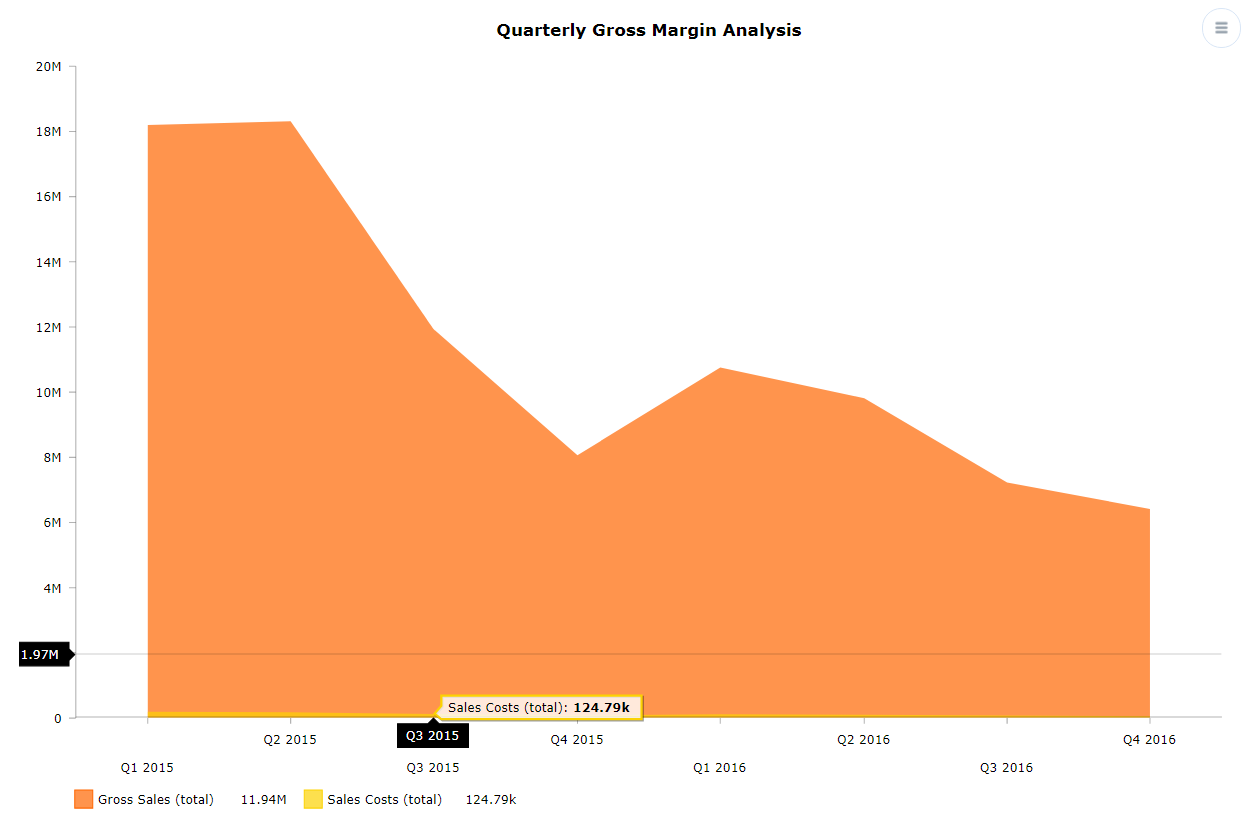 With the logarithmic option applied, you can notice that the Y-axis has changed to a base 10 log scale. The sales costs area is clearly visible, and you can tell how sales costs fluctuate over time. 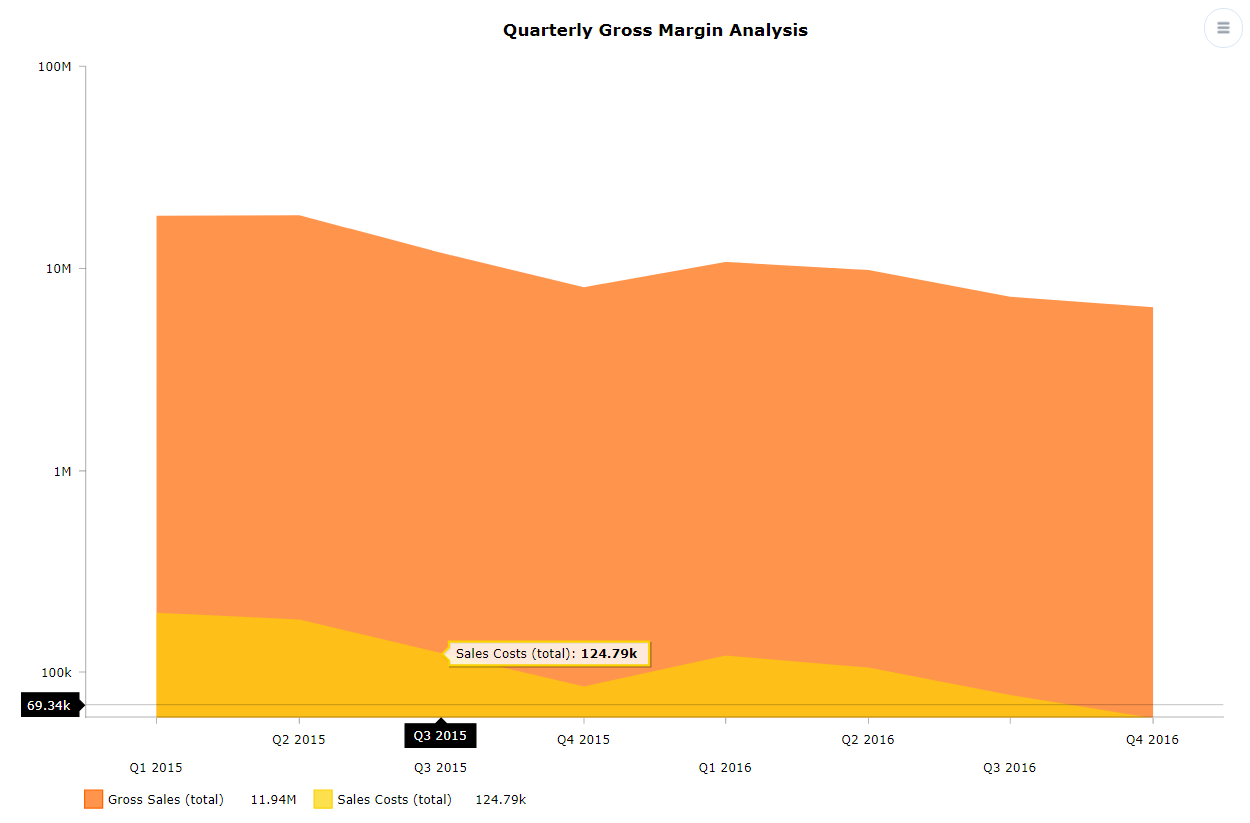 These examples show the importance of using the logarithmic scale to uncover important insights in the data. By using DataClarity storyboards, you can apply it to your charts with just one click.

DataClarity storyboards offer numerous capabilities to allow exploring your data for instant answers to your most important questions. You can create stunning analytics from an extensive library of visualizations and widgets, and share insights with others in seconds. Moreover, you can utilize any combination of visualizations, web content, graphics, and analytics from multiple vendors to create a unified user experience. To learn more about how you can empower your users with unified business views of your data, please visit DataClarity Analytics and Data Science platform microsite.

About the Author: Anna Korolivska

Anna Korolivska, a Product Specialist at DataClarity, is a member of the global platform owner team who performs client use case, market, technology and competitive research and analysis to drive road map innovation in the areas of data virtualization, data visualization, and data science.